Leavesden Hospital History Association "The Act of Caring is Heroic"

Want to join us?

From its opening on October 1st 1870 to its closing in October of 1995 the Leavesden Asylum/Hospital and its associated facilities relied on a work force of from 240 Doctors, nurses, support staff and volunteers in 1870 to a staff of 3500 in the 1950s to give care to the thousands and thousands of inmates (term used from 1870 to 1932) patients ( term used from 1932 to 1950s) and residents (term used from 1950s to 1990s who passed through their doors in need of help during the 127 years of the facilities operation. Many of these individuals gave much of their time and energies to help improve the lives of so many who had so little. Their acts of caring were truly heroic.

These are just a few of them

Jesse William Filler, was a Gardener at Leavesden Asylum (as it was then known) in the 1880s and 1890s. I can tell you the little that I know, but I wondered whether you have any information from that time?

Jesse William Filler was born in Sandridge in 1848. He married Isabella Hutchinson and they moved to Leavedsen where they raised a family of nine children. The 1891 census shows him living at Ganders Ash with the occupation "Gardener". Anecdotal accounts passed down through the family say that he managed several under-gardeners. Amongst other things they grew peaches and on occasions he would come home and pull one from his pocket!

An article in the Herts Advertiser 8/10/1881 refers to a court case involving the Asylum in which Jesse was called to give evidence. It was a trivial case but gives a small picture of life. Neighbours had been complaining about smells that they believed to be emanating from the boiling of food to be given to pigs on the estate. Jesse testified that he had caused the smell by spreading manure on the gardens. Apparently that was deemed OK and the case dismissed. The case was also reported in several other local papers - some with blow by blow accounts of what was said. Grief!!!!

When Jesse retired he was given a rather fine silver plated fish slice. I have it now, but there is no inscription. It is sadly in need of restoration.

Below is copy of the article which appeared in the Herts Advertiser and St Albans newspaper on the 8th of October 1881. Curtesy of British Newspaper Archive 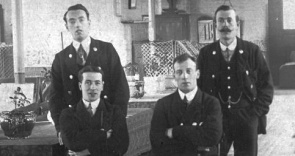 Male attendants circa 1900 worked exclusively male wards. There uniforms were typical of the original military/prison atmosphere of the early days of the hospital. 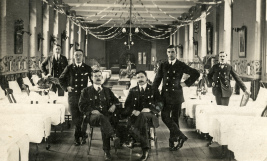 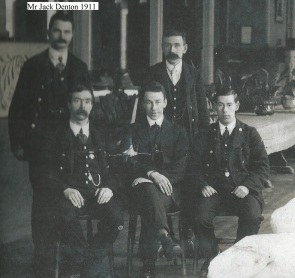 Jack Denton, standing back row on the left, started his career as a male ward attendant in 1907 and retired in 1937 as the Chief Attendent.

Jack Denton in 1937 as he retired from the hospital 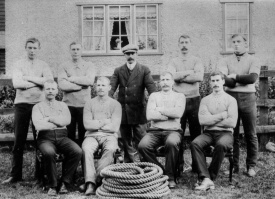 This is a photograph of the Leavesden Mental Hospital tug-of-war team in about 1910. It was taken in front of the workers cottages at Asylum Terrace (now known as Tanners Hill), where my great-grandfather lived for a while. They called the road the "frying-pan" because of its shape.
My great grandfather worked at the asylum as a labourer, perhaps as a stoker for a while, between 1901 and his death in 1920. He had previously served in the Royal Navy and had been on the crew of HMS Victory in Portsmouth when it was used as a supply ship. When I was visiting the hospital in the 1970s I was shown records of his wages by Roy Brown, the volunteer co-ordinator. (Roy Brown played for Watford F.C. in the 1950s.)
I know the identity of only two men in the photo. The first seated on the left is Thomas Morrissey and next to him, seated next to the rope, is my great-grandfather Edward Morrisey. Yes, the spellings are correct. For some reason my grandfather Edward dropped an s while his younger brother Thomas kept a double s in his surname. Their father, also Thomas, came from Waterford in Ireland and he had a double "s" in his surname.
Submitted by
Rory  Morrisey
21 June 2021

Some of the Nurses who worked at the St Pancras Workhouse/School in the early 1920s. The Workhosue/School was closed in April of 1930 and annexed by the Leavesden Mental Hospital. 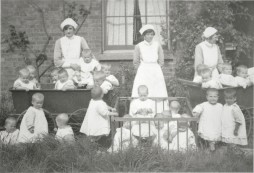 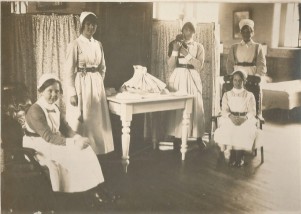 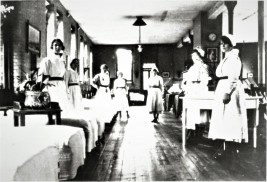 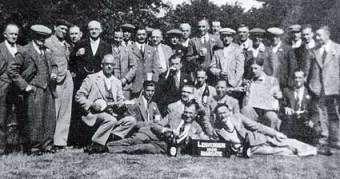 Members of staff take a day trip to Margate in 1937. 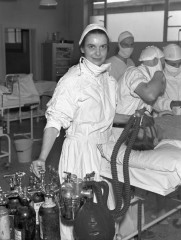 A nurse trained in Canada and assigned to the Canadian Hospital located in the old St Pancras Workhoue/School across Asylum Road (now College Road) from the main hospital during WW2. 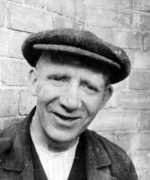 He was working at Odhams installing the printing presses when he was made redundant. Unable to join the forces due to a deformed foot, the Labour Exchange who were responsible for all jobs at that time, sent him to work at Leavesden Hospital.

His title as far as I am aware according to my father was Maintenance Engineer which covered everything.

As war started more and more able personnel were called up. The Gardener was called up, so Harry took over his job and 5 patients were assigned to help him maintain the gardens and grounds and vegetable growing areas.

Then the Farm hands were called up and he took over maintaining the farm machinery and now had up to 10 of the patients to assist him with tasks.

As you know the Hospital in 1940 was split in 2 for wounded Canadian Soldiers during the war years. This would have been the Canadian Hospital and later the Kaki University.

Harry was responsible for maintaining all the Hospital equipment in the operating theatres etc.

In 1948 the Army left the Hospital, and the original Home Farm was sold off along with all the animals and equipment and the new NHS took control of the Hospital.

Harry continued to work until he was about 70. He would catch the bus from the Harebreaks to the Hospital wearing his suit and tie and flat cap, swinging his small suitcase in his hand to counterbalance his invalid foot.

Everyone said he was happy working at the Hospital, and it was work he enjoyed.

This story was written by Stephen Ayres, Grandson of Harry Ayres. 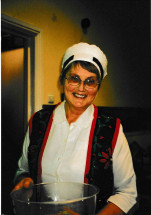 Felicity loved her time at the hospital and wrote this poem about her experiences there.

My Mum’s coming on the train.

“Oh I won’t be coming back .” she clarified.

And into the surrounding mayhem

A pool of silence fell.

I knew she wouldn’t be going home.

Next time she showed me her ring.

“You must be happy.”

There was no fiancé

And the ring looked as if it came from a cracker.

But who was I to shatter her dreams.

It was always the same story

As the years slipped by.

Marriage and going home were never going to happen.

Then one visit she wasn’t there.

“What’s happened to Jean?” I asked a nurse.

So I suppose she did go home.